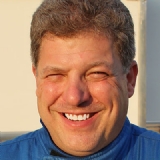 About John:
Born and raised in Chanute, Kan., John Allen has become one of the most successful drivers in the Modified division. John started racing at the age of 16, driving Street Stocks in Kansas, Oklahoma and Missouri. Late Models followed four years later and in 1991 John began his Modified career, driving throughout the Midwest and South.

Following the USMS Modified tour (now USMTS) in 1995 and 1996, John finished second and third, respectively, in points. He began the 1998 season following the NCRA Modified Series, finishing second in points.

From 2003 to 2006, John enjoyed competing at Lakeside Speedway in Kansas City, Kan., in the NASCAR Weekly Racing Series, while also competing many USMTS, NCRA and open events throughout the Midwest.

2005 David B. Harrison joins our crew as car owner.

In 2008, John won 2 USMTS races and 3 races at the Belleville Highbanks.

2009 was John's 25th year of racing. He captured 15 A feature wins and now has over 200 career wins.
2010 saw John adding a few IMCA races to his schedule. Along with two Hughes Chassis John had a Big Dog Chassis to run at these shows.
2011 John competed locally and at many specials in the area. He added a Shaw Chassis to his stable to be able to compete at some IMCA specials. He is also selling these cars at Allen's Automotive Inc.
2012-With the addition of a parts truck at Humboldt Speedway by Allen's Automotive and ran by Dylan and Kenton, John stayed close to home this year. He raced many USRA and USMTS events close to home and brought home the 2012 Humboldt Speedway modified championship!
2013 This year tied John's most wins in a season 20! In 2007 John also won 20 A features. John's oldest son, Dylan, also took to the track in a B mod. He ran 8 races in Humboldt and Lucas Oil Speedway combined. His highlight was one heat race win!
2014-John had 6 A feature wins and Dylan had 2! John also was honored to be a "Casey's Cup Driver" for USMTS. His car was sponsored by Oreos and Sour Patch Kids. This enabled John to race the entire Hunt.
In 2015 Club 98 grew! Along with Dylan racing full time, John's middle son Kenton also began his racing career in a b-mod. They both raced mostly at Humboldt Speedway.
2016 was a different year for John. He didn't have a full time ride, although he jumped into one of his son's b-mods from time to time. He focused more on his business and getting the boys the help they needed.
2017 John continues his role as crew cheif for his sons. He also jumps into a modified a little more this year for a couple different teams.
2018-John puts together a GRT by Allen for himself after selling Dylan's B-mod. He races about 14 times.
2019-John hits the track with his GRT by Allen and is able to finish the season driving a Hughes Chassis for Dave Gaggero along with teammate Tyler Davis.
2020-John hangs his helmet up in the shop and decides to go to work as a promoter for 81 Speedway in Park City, KS. This is a new challenge for the championship racer. He looks forward to bringing his knowledge as a racer and business owner to the promoting of a racing facility. 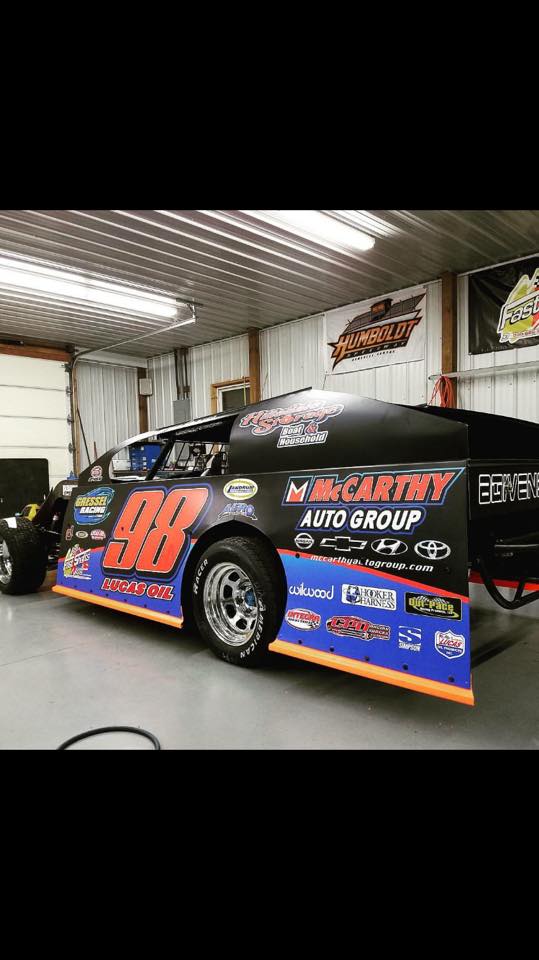 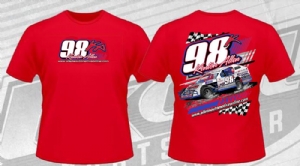 Kenton Allen Racing 2019 T-Shirt
Kenton Allen T-shirts are available is youth sizes and adult sizes up to 4XL in a high-quality 50/50 red design. You can pick them up at the track or order online!
© Copyright 2022 kentonallen.com